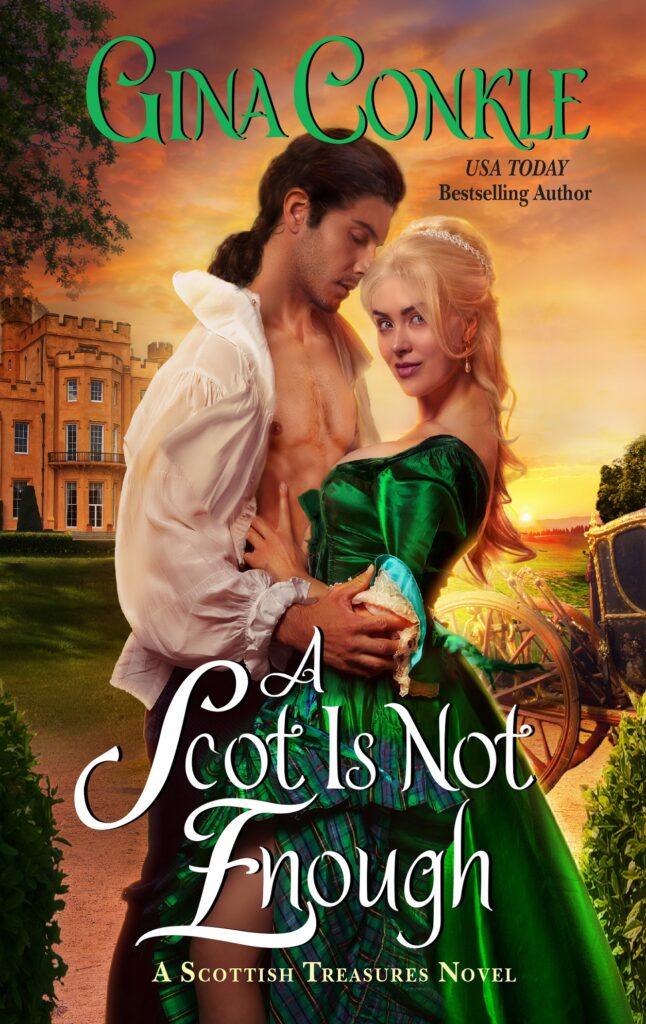 Loving the wrong woman is the right thing to do 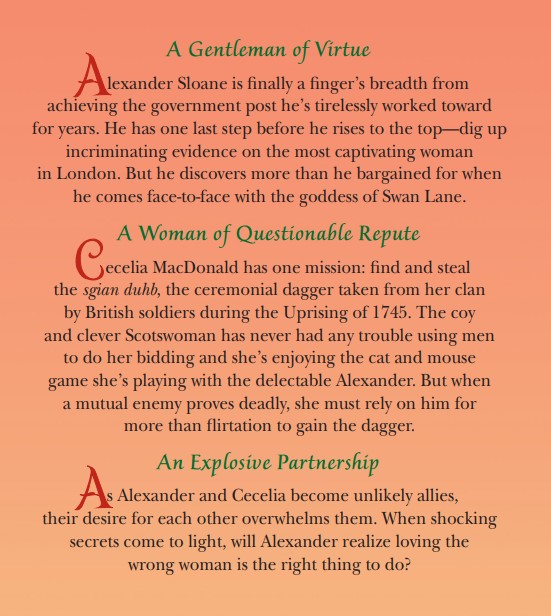 “Look,” she said softly, her elegant fingers touching the glass. “The fireworks are still burning, which means you have the final question.”

Smoke clung to the sky above Vauxhall. Within the fading cloud, embers sparked, little stars flickering their last. Her offer was an act of kindness so their meeting wouldn’t end on rocky notes. Her gaze sought his. She was a true artisan in the craft of humanity. Her flirtations, her laugh, her smiles were all part of a woman of incredible depth.

“You tempt me in the best and worst of ways, Miss MacDonald.”

Of all the women to crave, he’d chosen her—a seductive Jacobite with a worthy heart.

“The fireworks,” she whispered. “Their light is fading.”

He consumed the shadow between her small breasts. Asking to see them wouldn’t do, not with the considerable respect his soul was building for this woman. But he wanted—needed—something to sate his carnal nature.

His gaze ascended to her silken collarbone and the pale skin covering it.

“Your shoulder,” he demanded gruffly. “I want to see it.”

Jagged air left his lungs. Power was hers and he ceded all of it.

The corners of her mouth curled up.

What a seductive taunt. She could drive a man to his knees.

His laugh was rough and primitive. “You multiply my pleasure.”

Casual onlookers on the other side of King Street might see a man and a woman framed by a window. Sharper eyes would say seduction was afoot, but the keen observer would see the truth—a man surrendering to a woman.

He touched the tiny well at the bottom of her neck. So light, so bare, two reverent fingers, exploring.

The wispy sound struck sparks inside him. At least he wasn’t alone in his arousal.

Moonlight splashed her breastbone, a fascinating stretch between neck and bodice. Potent. Enamoring. He dragged his fingers down her chest, and she kindly let him have his misdirection.

He was sinking deeper and deeper, consumed.

Almond-scented warmth rose from her skin. Many women wore the same scented powder, yet on the Scotswoman, the aroma was sweet and sinful. Not a combination one might attribute to Miss MacDonald, but there was the rub. Her complexity.

Perhaps his touch had conjured the goddess of Swan Lane.

He skimmed two fingers over her collarbone. “You fascinate me.”

Deep inner muscles tensed. The goddess of Swan Lane was torturing him.

“Have a care, Miss MacDonald.” His voice stretched tautly.

“Your mandate not to mix business and pleasure—it is a wise but difficult one to follow,” she whispered.

Desire sawed his resistance. Vauxhall fireworks might’ve blinked their last. He didn’t care. The Scotswoman had given him leave to undress her shoulder, and he would take his time doing it. He hooked his fingers in velvet and dragged the rich cloth until her shoulder was bare. Moonlight kissed it first. He was jealous, bending to kiss her shoulder second.

His lips brushed soft, soft skin so heavenly he had to close his eyes.

Miss MacDonald gasped. This was tender, carnal. More explosive than he expected. His hand on her sleeve was shaking. He was shaking, savoring her smooth round shoulder with his mouth.

Petticoats shushed. Her body slanted to his, a hint of what could be. Miss MacDonald was seduction in its purest form. Her skin, aglow. Her collarbone, fragile. Her blond curls snagged in velvet. If he tunneled his fingers in those curls his need for her would swallow him whole.

Could a man drown in three inches of a woman’s unmoored sleeve?

Kissing the Scotswoman’s body wasn’t supposed to happen. Wanting her voraciously wasn’t supposed to happen. With each passing heartbeat, his resolve was crumbling. He leaned in, needing her, his forehead touching her shoulder. Warm skin and her scent tempted him. He brushed his lips over the arc of her shoulder, and he tasted her again and found rightness and perfection.

He looked down. Velvet was crushed and twisted in his grip. How far astray they’d gone. He let go and took a punishing step back.

“Our time is done,” he said in a ragged voice.

Miss MacDonald was heavy-lidded, her paste earbobs splintered pieces of light. Tonight, they had fallen prey to the art of distraction. He stood in the dark, while she was bathed in moonlight, her mouth a vermillion O.

“Give me information to satisfy Fielding,” he said. “And I will move heaven and earth to get those tickets to Swynford House.”

He would. Whatever it took to get her into the marquess’s home, though he wasn’t ready to spill how true his desire to get her there. Not like this with his cock heavy and his heart heavier. Miss MacDonald wanted a sentimental relic to soothe a brokenhearted old man. What he did to advance his ambitions, she did to heal her clan.

Their motives couldn’t be more different or more damning.

She was a sensual woman with a heart of gold, while his was stark and flinty. To the outside observer, everything he stood for was right and everything she did was wrong. What a muddled world they inhabited.

Miss MacDonald’s stupor melted by degrees. She set trembling hands on her stomacher and left her sleeve drooping.

“I accept your offer.”

She walked across his room, her petticoats a sweet hush. She folded her cloak over her arm and opened the door, brightness flooding her. The goddess of Swan Lane turned the air to spun gold, so penetrating and beautiful it hurt to look at her.

“Meet me at Gun Wharf, one o’clock tomorrow,” she said. “I have something you can give to Fielding.”

Miss MacDonald closed the door, taking the light with her.