Independent Lady Isabella is maddening. She doesn’t need Bow Street’s best until one Christmas Eve in a dark alley…

A  man in want of a woman ought  to avoid dark alleys— especially Christmas Eve in Queenhithe. Nothing good lurked late  at night  here, but a woman’s  voice teased his ear from the shadows.  Educated. Irked.  A  touch imperious.

“Unhand me you ridiculous excuse of a  man.”

Jack Emerson stopped his  horse, an ear angled to figure out which  alley.

Jack  dismounted, landing on the balls of his feet. He pulled a blade from his boot,  the metal’s ping  whisper soft. Eyes adjusting  to the stygian  road, he scanned warehouses  crowded   together.  Narrow pathways cut between brick walls.  A   hack lay sideways in  the  street, one wheel spinning a  lazy  circuit, no  horse  or  driver  in sight.

Jack bolted  to the  fallen hack, his run light-footed. Dogs barking the next street  over masked the sound of his approach.

“When I  pull the trigger, pressure will build behind the lead ball thus creating higher velocity in  the muzzle,”   the woman’s words echoed in  the high-walled  alley. “This close,  I won’t  miss.”

The  lady  was  a  vague  silhouette.  The   St. Giles man filled the alley,  a hulking  brute  in  a soiled, scarlet regimental  coat with trim dangling from a sleeve. Probably pilfered it off a dead soldier.

“Nimble  or not,  I  don’t  think  the lady  cares about your feet.” Jack  stepped quietly forward.

Pebble-small  eyes narrowed on Emerson.  “Plenty other skirts in  the Red  Swan.  This  one’s  mine.”

“You’re  full of  rot. That’s  Mr. Jack Emerson, Bow Street’s finest thief-taker.  The only  thing  you’ll get is  a meeting with the magistrate.”

“Our noticing has been quite  mutual,  I  think.” 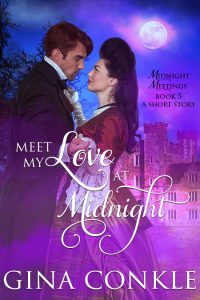 Chuckling,  he  ambled  forward,  crushing  a  shoe underfoot. A  burgundy brocade  frippery with black  silk  ties. He picked up the shoe still warm inside  to  the touch. Lady Isabella Foster was  pure temptress. Confident.  Unafraid. Refinement with an  edge of   grit.  Yet,  she’d  never  been forward with him in all the  times they crossed paths.

There  was  a story to  this  woman.  He’d start with rescuing her and then see her   safely home.  They’d shared quips in the past when  he’d patrolled  St.  James  on horseback. He enjoyed their verbal sparring  matches,  a contrast to  other  ladies  who  showed a surprising lack  of delicacy.  Bored wives and  bold widows practically drew  a   map to their bed chamber windows.  Never  Lady Foster.

Jack held  up her shoe,  its  black  silk ties fluttering over his hand. He  whistled at    the  gold  imprint  embossed on the inside heel.

“Necessary for  an  evening  of quality entertainment, don’t you   think?”  She was a swish of velvet  skirts.

With any other  woman, he  would dispatch  the criminal post  haste  and tend to legalities.  Lady Foster stimulated things. She made  a  chilly night…fun.

He dropped the  shoe into his  pocket.  “I  will  see it back on your foot, milady.”

“Are  we  done  with tea and   acquaintance?” The criminal whined, his thumb  pushing the brim of a ragged tricorn high  off  his forehead. “I’m  tryin’  to rob the  woman,  if  ye don’t mind.”

Jack took another step. There  were  twelve  to  fifteen paces  between him and  the  man.  At ten,  he’d hit his mark.

The   weapon  looked to be  a  woolder  stick from a rope making top.  The  man probably  worked every  task  on the docks, from spinning hemp into ropes to  hauling crates and barrels.  He was  a  tough  blighter with nothing to lose.

One backward swing of that  club  at Lady Foster  would do serious damage.

Jack  sauntered  forward. “Let  me  offer you a Christmas Eve  gift.  Drop your weapon where  you stand  and put  this nasty    business  of crime behind you.  Live  the  rest  of  your days an honest man.”

Meet My Love at Midnight by Gina Conkle