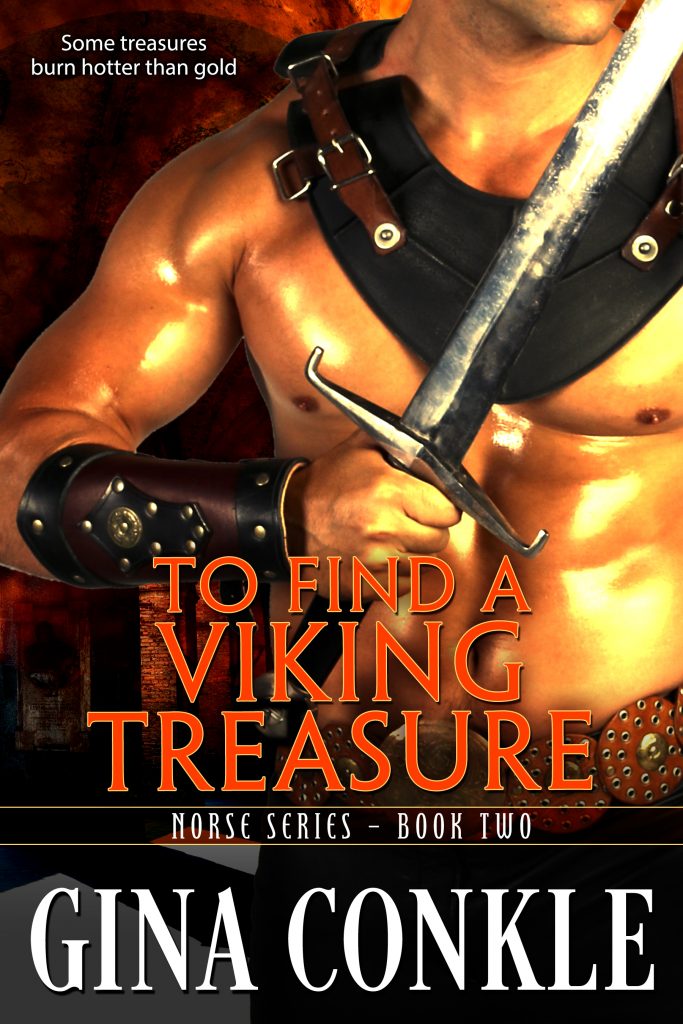 Survival’s in his blood
Rough-souled Brandr’s ready for a new life far from Uppsala, but he can’t stop thinking of a certain flame-haired thrall named Sestra who gets under his skin. Before he leaves for good, the Viking has one final task —Protect her at all costs.

Saving others is her purpose
A slave since birth, Sestra’s life has been filled with hardship…until she learns of a treasure hoard. With war coming, claiming the riches will save lives, but only one Viking can help her on this journey —Brandr, the fierce silver-eyed scout.

Chasing more than silver and gold
Brandr and Sestra have shared taunts and barbs. Now they must share trust in what becomes a desperate bid to survive. Passions flare as secrets unfold, leading one to make a daring sacrifice that changes everything on their quest To Find a Viking Treasure…

She huddled on her seat. Water rippled harmlessly, darkening here, the depth too great to see the earth below. Morning would be better if the air cleared, but Brandr navigated like a man born to wind and water. She’d already described to him which island they sought when they started.

Light scraping noises brushed the boat as three gulls squawked overhead. Brandr paused to study the birds and the treetops poking through fog. A cluster of islands rose from the mist.

“Have you decided what you’ll do with your gold?” she asked.

Lines framing his mouth deepened his scowl. “Do you always talk this much?”

The scraping got louder under the soles of her boots. Brandr sculled the water in long smooth strokes, checking the boat’s wake.

“Yes. When I’m nervous,” she said, checking the floor.

“Then you must be nervous all the time because you’re always talking.”

The seam of his mouth tightened. “Especially the men.”

She was about to give him a 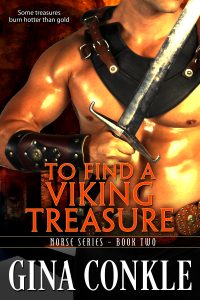 tongue lashing when the boat lurched violently. Heart in her throat, she gripped the side rails. “I don’t know how to swim!”

“We bumped a fallen log. That’s all.” He dropped an oar and cosseted her shoulder. “Shhh. See there.” Brandr pointed one long-boned arm at the water.

She stretched her neck for a better look, her nails digging into the boat’s wood slats. The tree lay in its watery grave, a thick, green-slimed branch reaching under their vessel.

Her fast thumping heart slowed, and she let go of the rails. “Thank you for not turning that into a jest.”

“You’ve nothing to fear. I’ll take care of you.”

Of course he would. He’d vowed as much to Lord Hakan. Watching over her was the Viking’s final labor before he departed for better places. She couldn’t let ideas about him get in her head. This surprising kindness was no different than what he did for the old man at dawn.

She hugged herself against the cold, tasting the watery air in her mouth. “I should’ve told you I don’t like boats and deep water.”

Her lips wobbled with a half-smile. How like Brandr to slice the matter to its core. She’d convinced herself with fog hiding the open water, she’d be fine, but Brandr made her feel safe the moment she set foot inside the boat, his presence the lifeline she needed.

Still, her gaze skittered over the boat rail.

Brandr sliced the oars through water…back and forth, his body’s motion hypnotic and smooth. “Go ahead. Talk to me.”

The Viking could be a mystical warrior dressed in black against waning fog, his graveled voice working a kind of silken magic. Sun shined through clouds, the pearled orb anointing his head. Perhaps Odin did send Brandr to save the day.

Wraiths rose up from the channel as if to push them along. Did the Norse gods want them to succeed? She didn’t believe in Odin and his Valkyries, but the stories Vikings spun at night entranced her.

“You could tell me what you’ll do with your reward,” she said.

He snorted. “I said you could talk to me. Not the other way around.”

“That’s not how it works. People take turns talking and listening to each other. It’s called conversation.” She angled her head coyly. “Vikings can do it. I’ve seen it happen.”

Brandr squinted at tree tops rising above the mist. “Never been much for talk.”

“Your mouth never stops when trading jibes with me.”

His chuckle was raspy and low. “You have a way of loosening my tongue.”

To her shame, his laugh cut a scorching path through her body and her legs fell open under her skirts. Her knees were heavy, and she left them open.

“You’re a warrior long in service to Lord Hakan. Surely you’ll get a bigger reward than a handful of coins?”

His tarnished silver eyes pinned her. “Maybe I get you.”

To Find a Viking Treasure by Gina Conkle