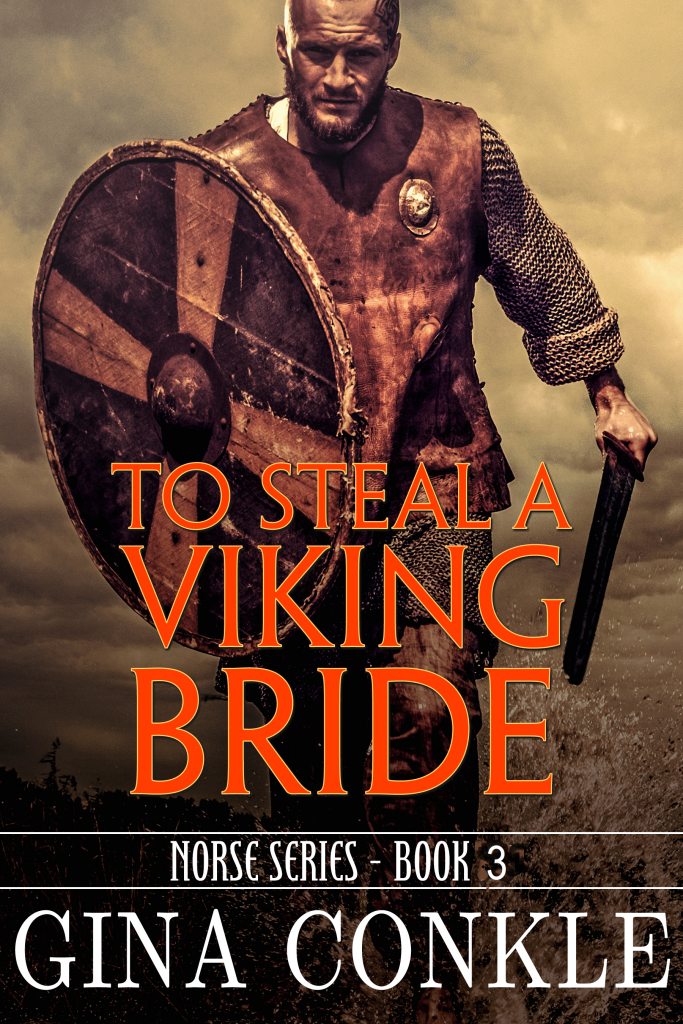 A dark-eyed warrior grabs Eira at her betrothal feast. As night unfolds, a shocking secret is revealed.

Eira must choose to marry the powerful Viking, Steinar—and be the first woman to take Aland’s jarl seat—or claim a second chance at love with Gunnar, the low-born Viking from her past.

Wars and weddings were alike in her father’s longhouse…celebrations marked with roast venison, rose hip mead, and raucous laughter. And much revelry. Except the old women. They drank quietly, their aged eyes fixed on the fire pit. Eira’s cheek brushed the leather curtain she stood behind. She tried to read their faces through a break in the weave.

What secrets did the elders hide?

They’d seen enough merriment honoring marriage and battle. The two feasts could be cut from the same cloth.

Her gaze slid to the great chair where her father, Den Gamle, Aland’s greatest chieftain raised a silver-trimmed drinking horn. The chair would be hers as would the man beside it, Steinar of Uppakra, a Viking of great standing and lethal ambition. Beautiful and strong, he could be the perfect mate, but when the time was right, she’d kill him. He deserved it for what he’d done three years past.

“Calculating our wealth, is he?” She clutched the key ring heavy on her thigh. “He works harder to open my father’s chests than my heart.”

Fine saffron wool stretched across his massive chest. Steinar didn’t need more silver, and he didn’t need her. She was a prize. Nothing more.

His well-shaped lips tightened when he spied her 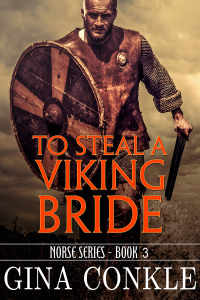 empty seat. She stepped back in the shadows. The curtain had been her mother’s idea, a lattice weave of leather strips hanging from the ceiling to hide unsightly barrels in the corner of the hall. When her sister Ginna had whispered to her, “We need more apples,” she was glad to slip away for a moment of quiet. The bucket of fruit in hand, it was time to return.

Cool drafts stirred her skirts. “Who left the back door—”

A brawny arm manacled her waist. The bucket dropped. Apples tumbled underfoot as she struggled against a wall of muscle and heat.

“Don’t fight me,” a male voice rasped into her ear.

“More than a hundred men are outside. One battle cry from me and they’ll storm this longhouse. Understand?”

Limbs locked, her gaze shot across the hall. Ginna laughed with her husband, Ivar, her belly round with child. Eira gave a jerky nod. Her captor’s arm slid up her body, pressing her breasts as he walked her backward.

Was he stealing her? Or worse?

Sweat beaded her forehead. The smooth white tip of her favorite paring knife poked from her pocket. She reached for the elk bone handle, crying out in pain when a large, calloused hand crushed hers.

The warrior’s breath was hot on her neck. “Drop it.”

Hand shaking, her knuckles showed white. Wide-eyed, she struggled to see the man behind her. He couldn’t have seen the knife. He knew it was there. Her teeth scraped the hand covering her mouth, but the warrior pinched her nose. Metal flashed…her blade’s iron and a gold arm ring on her captor’s wrist.

Skin hot, her body craved a breath. She pushed back with all her might. A barrel thumped the wall. Air…the lack of it sunk her empty lungs. Her body fell against her captor. The hold on her nose slackened. Sweet air wheezed through her nostrils and filled her chest. The man grunted, but he squeezed her blade-wielding hand harder.

Five men played goat bone flutes across the hall, the light notes floating strangely. Her breath came fast, sharp. A solid thigh squashed her bottom. Blonde hair fell across her eyes in the furious dance to be free. An ivory comb dangled over her breast. Shouts of laughter rang in the hall. New heat surged her limbs. She pushed again. The warrior rammed a barrel, toppling a turnip bucket.

“Eira! Stop fighting me,” the voice hissed in her ear.

She jerked at the sound of her name. Hand numb, she dropped the knife. Beyond the lattice curtain Aland’s people reveled as she battled the invader. He dragged her to back door. Panting hard she clawed her captor’s leather arm braces. Legs wheeling in the air, she drove back with all her might.

Thunk. Her head hit his chin and the world spun.

Feet twisted with his, she landed hard on apples and turnips. She winced at faint stars dancing before her eyes. The noisy feast, the goat bone flutes carried on. Her head throbbed. Lumps gouged her ribs and thighs.

A grey wolf-skin boot stirred on her blue skirt. Tattered red garters crossed the fur. For a split second her breath stopped. The same booted foot had lifted her skirt a long time ago.

“Gunnar?” She rolled over.

Brown eyes narrowed with accusation inches from her. Light from the great hall slashed his sensual features marred by a newly seared wound slanting cheek to chin. Soot smudged and raven-haired, he could be a prince of darkness come for his due.

“It’s nothing.” He grimaced and pushed himself upright as if he needed distance between them.

A lump formed in her throat. Gunnar rested gingerly against the barrel, both legs stretched out before him. She hungered for details. The places he’d seen. The things he’d done. She sat up, feasting her eyes on him. Exhaustion shadowed his face, but his shoulders were broader, arms thicker, even his hands resting on long thighs were bigger. Three years spent in far flung places changed a man, made him wiser or proved him a fool. Hardness tinged Gunnar’s once-soulful eyes, and his mouth twisted, bitter and wordless.

Did he plan to starve her of conversation?

Her heart thumped like the hall’s drums. Time hadn’t dimmed her lust for the warrior, but it fueled a confusing brew of anger, concern, and want.

“This is bad timing with the war in Uppsala.” Wetness bloomed on his tunic over his ribs. “Or perhaps you’ve already been there?” Touching the spot left her fingers sticky. “You’re bleeding.”

“I’m healing.” Gunnar grabbed her hand and held tight. “I think my timing’s good…showing up at your betrothal feast.

“Have you forgotten your promise to wait for me?” His eyes sparked harshly.

“I waited for you,” she hissed, yanking her hand free. “But you didn’t come.”

Gunnar, proof her words hit a tender mark. He watched her, his face a stoic mask as music reached high notes beyond the curtain.

Why did he come back now?