Where Did Life Begin? With the Vikings, that is… Part 1

The title could be “In the beginning…”

“Watch out!  Driftwood ahead!”

A little strange, I know. I’ll come ’round to that later.

Find a comfy spot. Icelander Snorri Sturluson liked a good story.  He’s the one who put the Sagas into print about three hundred years after the Viking Age came to an end.  To really understand the Nordic ethos means looking deeper into the weave that marks “In the beginning…”

Mix Threads of Emptiness and Fire 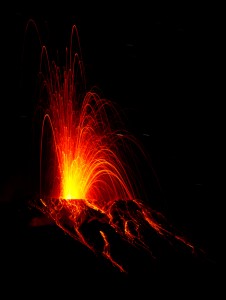 Snorri tells us there was nothing. Nothing above. Nothing below. For the brave soul willing to peek, there was only emptiness called Ginnungagap.

Suddenly, bursting onto Ginnungagap comes the giant Surtr with his flaming sword. From that mighty sword flow rivers of fire that turn hard as iron and then to ice.  This icy pathway made a bridge.

When thaws came (inevitable when flame and ice meet), dripping icicles formed the first frost giant, Ymir and his cow.

Ymir lived off his cow’s milk and the cow lived off licking the abundant ice.  Good thing, too. The cow licked clean through to free the handsome god Bor and ice giantess wife, Bestla.

The pair had three sons, one of them being Odin, who claims the title “All-Father” in the Norse pantheon. The other two: Vili and Ve.

Stir in Some Strife

Bor and Bestla’s offspring slayed the giant, Ymir and formed the world from his body parts. Ymir’s skin made the soil, his blood became the sea, and his bones and teeth made stones.  The giant’s eyebrows formed Middle Earth (J.R.R Tolkein anyone?) where Odin found driftwood on the seashore (I said we’d come back to the driftwood).

And what did he do with it?

Why he created the first man and woman: Ask and Embla. 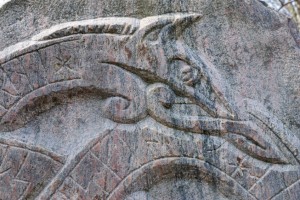 And Finish Off with a Serpent of Epic Porportions

Would you be surprised if I told you a giant serpent shows up?  With the flaming sword, man coming from the earth, and the “A” and “E” names of Earth’s first couple, you were waiting for the snake, right?

When it comes to Norse folklore, they deliver — a giant snake and a “heaven” of silver and gold, but more on that next week.

I hope to see you again.

If you enjoyed this post, why not sign up for my newsletter?  Sign up below to gain access to sneak peek information, short historical tidbits, and the latest news of what’s going on in my writer’s world.