A “First Meet” excerpt from Meet the Earl at Midnight

“The Phantom of London” excerpt

All things considered, a rare view of the eccentric Earl of Greenwich made the midnight rouse worthwhile. The men conversed in low tones, and Lydia indulged her curiosity, blatantly staring from the folds of her hood.  Shameless behavior, of course, but why dither over that?  Any woman in her shoes would do the same.

The Phantom of London.  Enigma Earl. The Greenwich Recluse.

You had to be hiding in a cave to have not heard one of those infamous monikers.  A scientist of note, he vanished, a few years past from the public eye.  Broad sheets claimed he never ventured out in the light of day.  People whispered of a carriage bearing the Greenwich coat of arms, an ominous black conveyance tearing about Town, curtains drawn.

Some said the Earl suffered from madness.  Some said he was stricken with a hideous, disfiguring disease.  These silly stories came to mind because she read them to Great Aunt Euphemia, who thrived on a steady diet of gossip pages.

Lydia pushed back her hood a fraction for a better look at London’s favorite phantom.  When he raised his head, she glimpsed dark eyebrows and strands of gold-brown hair framing what must be his face hidden behind the collar. Apparently, the Enigma was blonde.

She smiled, recalling the whimsies of Town chatter when it eventually made its way to humble Wickersham.  Shrouded as he was, one could see why so many peculiar assumptions abounded.  Truly, George conversed with a slit of eyes. At that picture, a yawning laugh escaped her.

“Did I laugh? Sorry about that.”  Lydia covered her mouth, not caring a whit.  “I thought we were here to save Tristan, not have a midnight meeting with your employer. Not sure why I’m here.”

“Like I told you in the hack. Silence, gel—”

“Be nice, Montgomery, or you’ll find me less lenient,” Lord Greenwich stopped their exchange. “No more delays.  She goes with me…as per the agreement.”

Lydia snapped to attention.  All vestiges of her hazy drowse vanished.

“What did you say?” Her head tipped toward the Earl.

“Yes, I heard you, but I thought we were here to save Tristan.  What’s this about an agreement?”

His dark eyes narrowed on her.  “You are here to save your stepbrother…in a manner of speaking.”

“His whereabouts are not my concern.”

Now this was all very cryptic. Lydia planted a hand on her hip and taking a deep breath, tried for clarity.

“But I thought he was in some kind of minor scrape.”

“There’s nothing minor about your family’s troubles.”  The Earl scoffed and his cultured voice sharpened. “I wouldn’t call your stepbrother borrowing money from some unsavory types minor.  He came begging for help not long after he started his apprenticeship.  My man of business—” He gestured to the well-dressed man near the window.  “—obliged him with a loan.  When Tristan couldn’t repay that debt, he stole from Sanford Shipping. Your stepfather made matters worse by trying to cover it up…from me.” His lordship’s tone lightened at this. “Even lifted some coin for himself.  But we waste time; you know this already.”

Lydia digested the news: Tristan and George were thieves; the Earl found humor in the fact that they tried to pull the wool over his eyes; and he assumed she was fully apprised. Worse yet, Lydia was somehow embroiled in this mess, a mess that looked to be more than a paltry few coins lifted from a till.  She glared at her stepfather who shrunk under her withering stare, and then she faced Lord Greenwich.

“The apple doesn’t fall far from the tree, my lord, and this sounds like a worse muddle than what’s typical.  But, I fail to see what this has to do with me.” Irritation building, she enunciated each word, “If you please, sir, the hour is late and my skirt is soggy.”

She shouldn’t take a nursemaid’s scolding tone with nobility, but thunder cracked overhead, a reminder of the nasty storm, and her patience ran dry.  She had things to do come daybreak.  The hearth’s fire flickered orange light across his lordship’s exposed slice of humanity, and his dark-eyed scrutiny softened.

“I understand this is all very abrupt, Miss Montgomery.  We need to begin with proper introductions. I am Lord Greenwich.”  The Earl gave a small bow and motioned to the bald man.  “And this is Mr. Jonas Bacon, my man of business.”

Her gaze snapped to Mr. Bacon’s hulking form.  He managed a thin veneer of respectability by the fine clothes he wore and the good grace of a noble’s company.  Man of business?  What kind of business was one question banging around her head among the others crowding for space, but good manners prevailed.  Lydia curtseyed greetings before taking a deep breath and trying anew with sleep-deprived tolerance.

“Yes, I know who you are. I’ve gathered that much. But, what do you mean by this agreement?”

The Earl’s dark eyes widened under his black brim. “Are you telling me you know nothing?”

“I’m very much uninformed, sir. I knew my stepfather was in your employ as clerk and recently Tristan, but this is the first I’ve heard of any thievery. Terrible news…but I’m at a loss as to how my presence makes a difference.”

That slash of topaz dark eyes searched her face and the fine hairs on her neck bristled again. Heavens, she had nothing to hide, unlike these men. His lordship exchanged a glance with his man of business.  Five of Mr. Bacon’s fingertips braced a washstand in relaxed repose, yet his indifference belied a pair of alert, assessing eyes.  The Earl sighed behind the collar as he faced her.

“My apologies, Miss Montgomery, I was led to believe you were an informed party—” He cast a sharp-eyed look at George.  “—on all aspects of this predicament.”

George coughed and his thin body hunched within his great coat.

“Allow me to explain,” the Earl continued.  “More than a fortnight past, I confronted your stepfather with evidence of the theft. Of course there’d be a trial…certain conviction due to overwhelming evidence…incarceration at Newgate…unfortunately for your mother, the Compter—”

“The Compter?” she cried.  “Are you mad? My mother won’t go there…least of all for something George did.”

“—until the debts have been satisfied,” Lord Greenwich finished. “Of course, being past your majority, you are in no way under familial obligation.”

Her stomach lurched at his casual discussion of her mother in that ancient Cheapside prison.  Damp, moldy bricks reeked of death and excrement, casting its horrid pall long before the edifice came to view.  Debtors and their families toiled in darkness, slogging for years before gaining freedom; others wasted to nothing, forgotten by the outside world.

Scrawny children, released in daylight, begged and scrambled for ha’pennies while standing in filthy gutters, all in the name of repaying family debts. And the horrors of a woman alone…she shuddered.  Lydia was of an age and free; her mother, shackled to George, was stuck.  Forever.

“There must be another way.”  Her voice rose with each word. “How bad is this blasted debt?”

He raised a gloved hand to halt her onslaught of words.

“You talk of sending my mother to the Compter, and you’re bothered by hysterics,” she bit each word at him and took a step closer.

His lordship’s eyes closed a moment, as if he dipped into a well of forbearance. “If you’ll remain calm, I’ll finish.”

Lydia scowled at George who was too busy wiping perspiration from his forehead; she’d get no help from that quarter.  She wouldn’t put it past him to implicate her mother in some way just to weasel his way out of any consequence.

“There is an amenable solution…a plan, if you will.”

“Yes, I’m most interested to hear what plan was concocted without my knowledge,” she said, glaring at the Earl.

“Please understand, Miss Montgomery, I thought you were in full agreement to the solution your stepfather presented.”  The cadence of his voice slowed.   “Call it a creative remedy to satisfy an urgent requirement of mine.”

“I don’t care what you need.  My mother will not go to that hellish place.”

“Careful, Miss Montgomery,” the Earl cautioned. “You’re in no position to make such pronouncements…such is the way of things with theft and debt, an imperfect justice system to be sure.”

Lydia inhaled quickly about to give his high and mightiness the sharp end of her tongue.

“Wait.”  He raised a gloved hand.  “I’m not without compassion.  Understand…the power to resolve this matter rests in your hands.”

Lydia was sure she had the red-faced bearing of an angry fishwife.  But, he was nobility, and George and Tristan were clearly at fault.

“Go on, then.” Her arms clamped over her chest, bunching damp garments. “You said something about a plan.”

“Your stepfather overheard a conversation I had with my solicitor at Sanford Shipping. He knew of a particular and rather urgent need of mine.  To get to the point — he offered you.”

“Offered me? You want to employ me to pay off this debt?”  Lydia canted her head sideways.  “That’s what this is about?”

Lord Greenwich had the nerve to be amused; at least she took the muffled sound behind the collar to be a laugh. Beside him, a heavy log rolled and split apart in the hearth.  Firelight flared a bright dance of orange and yellow, exposing his splinter of skin.

“No, Miss Montgomery, I don’t want to employ you.” He paused, and topaz eyes scrutinized her. “I need you for a different purpose.”

Though bare of her corset, Lydia couldn’t shake the sensation of stays pinching her ribs.  Breathing became difficult.  Male stares bored into her, waiting.  Her fingers dug at scratchy wool and muslin.

His lordship sighed over-long and repeated in a monotone voice, “Because Tristan and your stepfather stole—”

The Earl’s shoulders squared.  His dark-eyed look reached across the space and pinned her.

“More precisely, I need your body.” 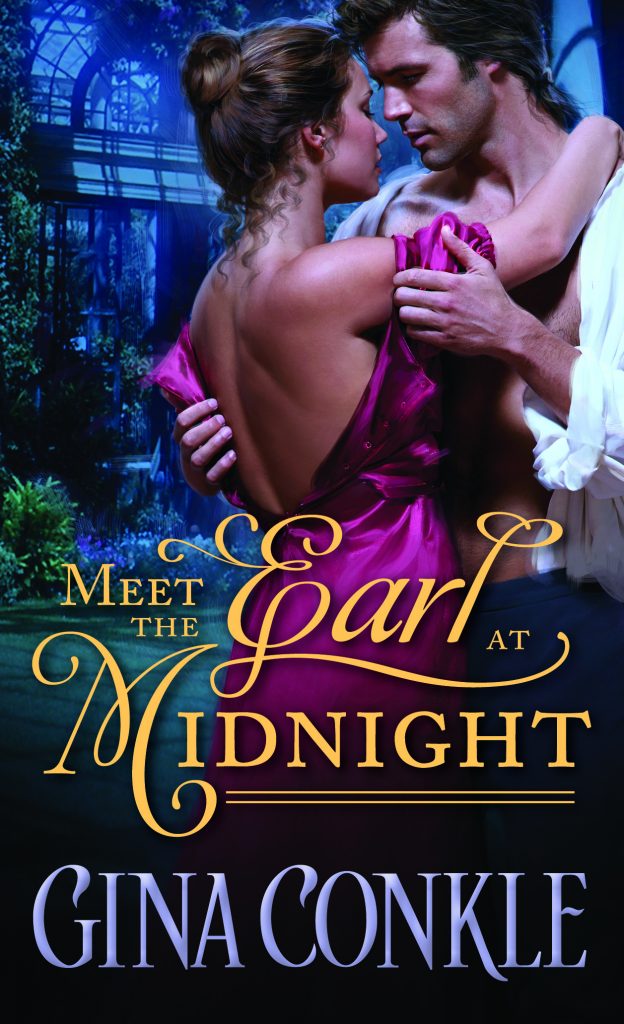