How to Eat Like a Viking: Bread in Bag…Viking Fast Food 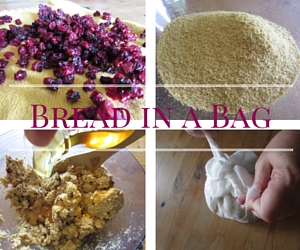 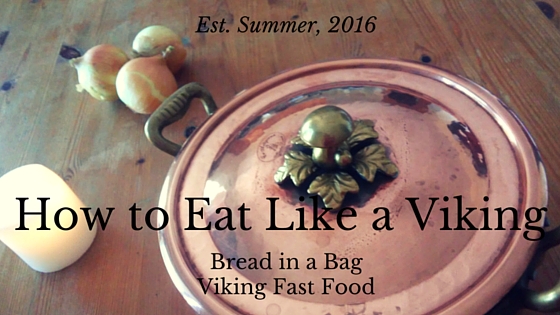 What’s a busy Viking matron to do when she’s got a gaggle of kids at her skirts and a farm to tend? You know as well I do at the end of the day many mouths will want to be fed.

Like so many moms on the go, the Viking wife and mom had a lot of responsibilities. Sometimes planning dinner falls through the cracks.  Norse women had the same problems you and I do, trying to get through her to do list, but unlike the modern woman, she didn’t have a drive thru to save her. Confession: I’ve done that more times than I care to admit.

Enter bread in a bag (and sometimes dinner in a bag).

Most breads in Vikingdom were pan fried. We know about the ovens in Lejre, but it’s possible most Norse women boiled  dough like dumplings or knodeln. Anglo Saxon sources tell about meals being wrapped in linen or other cloth and boiled in stock* (ie bone broth).

There’s no definitive archaeological find that confirms Vikings did this. However, some bread finds hint at this cooking method. A matron could wrap up dinner in a linen bag, toss it in a cauldron of stock, and let it slow cook all day or boil it if she’s short on time. The ease of making bread this way is no different.

Here’s what I did: 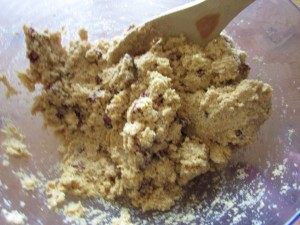 Mix the ingredients together until the dough is a consistent lump (it’ll look like a large scone only doughy). 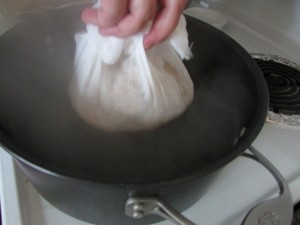 Dust your linen cloth or cheesecloth with the a sprinkle of flax flour (most Vikings would’ve used barley or rye for this recipe).  Knot the “bag” and put it in a pan of boiling water. I prefer to use bone broth for meals in a bag versus bread with berries.

Cook for 30-40 minutes. Remove the bag with tongs and let it sit for awhile until cooled.

When the bag is not too hot to the touch, you can cut or untie the top and voila! Bread in a bag…Viking fast food. 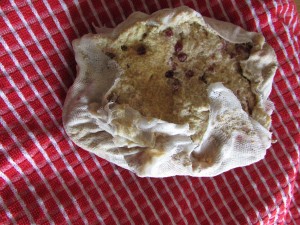 Get your freshly churned butter and enjoy!

Next week? It’s a surprise on a BIG scale. Stay tuned! 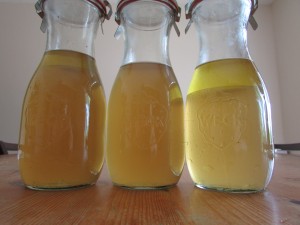 **Flax flour. The more common grains would’ve been rye, barley, or oats for Viking breads. Flax wasn’t thought of as much for food, rather it was grown as a working plant. The fibers were used to make linen. Fatty linseeds can be used in cooking  (and are today). Some breads discovered at Birka’s archaeological digs had flax seeds in them.

***Lingonberries.  This rich red berry grows wildly in Scandinavia. It’s antioxidant levels are five times greater than the almighty organic blueberry. I used dried lingonberries in the bread. When I ate them, their flavor reminded me of mildly tart cherries. toward the end of the series, I’m going to write a post on a variety of Scandinavian berries, their health properties, and the myriad ways Viking Age people used them.