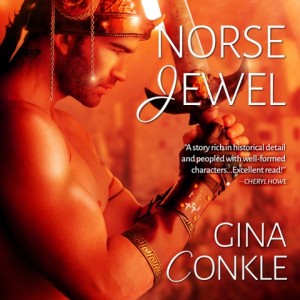 Are you a fan of Viking romance? Do you like to hear your alpha males in action?

Last Friday heralded the release of Norse Jewel, a romance set in AD 1022.

Viking warrior Hakan wants to lay down his sword and live a peaceful farmer’s life, but he’s forgotten the rhythms of that life. To help him, he buys Helena, a Frankish thrall not born to slavery. She’ll tend his long neglected home and give him lessons in Frankish for the lucrative wine trading.

Or so he thinks.

What Hakan really needs are lessons in love. And Helena’s just the woman to thaw his icy heart.

He saw wetness on her lashes. She faced the fields, and another piece of the riddle that made Helena fell into place.

Hakan cupped her chin. His thumb stroked her scarred jaw. “Your pouch, the stone is the reason for this. Magnuson said as much.”

She nodded, sniffling and swiping at tears that rolled down her cheeks.

His thumb brushed her cheek’s curving pink scar. “The stone almost cost you your life. Why?”

Hakan, with great tenderness, touched her face. The salve had done its work: smooth, touchable skin remained. But the salve only healed skin deep wounds. Some wounds lurked deeper than the Dane’s cut. What ached beneath the surface? More fat tears rolled down her cheeks.

“I am a peasant maid.” Her voice quivered. “When Guerin wanted me, I felt…” Helena sniffed and chewed her lower lip. “I was suddenly important. A woman of value. Without it…”

Her vulnerable admission was a tender spot for her. Couldn’t she see her worth was higher than any stone?

His thumbs wiped away her tears. “Keep the pendant. It came at a great price. Wear it for all to see.”

Hakan took her hand in his and set the necklace in her palm. He curled her fingers over jewel and chain.

“Aye, Helena, the stone could buy more thralls. But ‘tis metal and stone. They do nothing for me.”

Her lashes, spiked with wetness, fluttered at him. Bewilderment writ on her face.

He shook his head and soothed his voice as if calming a babe. “I’ll not trade you for that.”

How could he explain what he didn’t fully understand? He was on shaky ground. From the corner of his eye, the corner of a red sail caught a strong breeze and fluttered. Selig replaced the rocks that tamped down the sail before the whole cloth blew free. The vibrant red waved at him, a banner by which he could escape explaining why he would not let her go.

Hakan waved his arm at the sails drying in the meadow. “Look what you’ve accomplished in so short a time. You promised me great talent weaving fine linens…to expand my wealth.” He folded his arms across his chest. “Strong sails for my ships. This I understand.” Glancing at the jewelry, he frowned. “Stones do nothing for me.”

A thousand glittering stones couldn’t equal her worth. He stared into the depths of her blue eyes and called himself a coward for not admitting this to her.

Helena sniffed again and clutched the pendant, returning it to the leather pouch. “Is there no custom? No means to gain my freedom?”

He looked again at the red sail. “There are ways.”

“Mardred told me a thrall can earn her freedom after some years of service. Is this true?”

“Aye.” His arms stayed crossed, unmoving. He’d give no more.

“Then, may I strike such an agreement with you?”

“I want to earn my freedom.” Her eyes pleaded with him.

Hakan shifted his stance, cagey about giving an inch. His neck and shoulders knotted.

True, many a valuable thrall gained freedom after years of service. Most stayed.

“Serve me well for seven years, Helena, and you’ll be a freewoman.”

“The time cannot be shortened?” She clasped her hands together. “Seven years,” she groaned. “So long.”

“I will not be swayed on this.”

She canted her head, doubt clouding her features. “But, will you keep your word, my lord?”

“What makes you doubt me? The way I’ve mistreated you?”

Helena flinched at his sarcasm. She was not satisfied. Seven years must feel like one hundred to her. Her fingers plucked at her apron, and she kept silent. A stab, like a hot brand, hit him. This was rejection. An arm’s length from her, Hakan shut himself away as if in a distant fortress. “I require your respect. For seven years.”

Pain flashed from her eyes. She dabbed at their corners and nodded.

Hakan needed to move. He needed something to ease the itch that plagued him. He needed to keep a good distance from her. His ax leaned against the barn. He grabbed it and swung the heavy tool over his shoulder.

“I have to clear some trees,” he announced. The field did need widening, and he needed wood.

The tree line would keep him a safe distance from her, yet he could keep an eye on the longhouse. And the loom where she would sit. Hakan walked to the edge of the yard and something pushed him to needle her.

“I expect fresh bread at my table tonight. See to it.”

Her eyebrows shot up at his harsh command. He hadn’t spoken to her that way since the journey to Svea. Her body visibly bristled at his tone. He waited, and Helena bowed her head in exaggerated servitude. Hakan whistled on his way to chop wood, pleased at gaining the upper hand.

Much could happen in seven years.

Available on Amazon Audible with WhisperSync