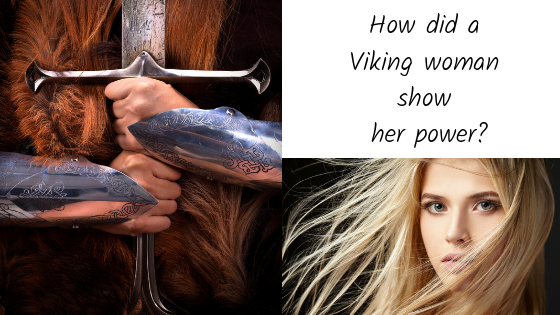 I'm tempted to answer the question from the picture above with the standard "Very carefully." But I won't. Viking women were rarely timid. Some were quiet, contemplative, considerate, crafty, clever beyond the scale of the times, but definitely not timid.

This post will be a quick one with fascinating photos of what women wore to show power, wealth, and allegiance long ago.

You might've read about Viking kings and jarls who wore torques, right? During the Viking Age, Nordic leaders didn't have time for crowns like other European counterparts. But, oh the chains!

Women adorned themselves with chains and brooches to show status and wealth. This Baltic woman's chain (found in Latvia in 1100) showed her position in spades. Made of copper alloy, this jewelry would have been attached to her tunic by the two brooches at the top (about 2 inches in length), decorated with amber, bone, and a small bell. The whole ensemble is a little over 2 feet long.

Imagine wearing that at the next wedding celebration you're invited to!

Wear it BIG with animal pride

I love that multi coil copper bracelet. It's a Baltic design (i.e. Southern Finland, Latvia, Lithuania, and Estonia). The other broken bracelet is equally heavy and made of copper alloy like the multi-coil piece.

The orange-ish looking thing is amber carved to look like a bear tooth. The real bear tooth is next to it. These all had meaning in that time. For a Viking or Baltic person to have small crosses etched into their jewelry was a sign of their religious allegiance, a way of communicating without speaking the same language when they visited another port or kingdom.

In the same vein, animal items could be signs of power or loyalty/worship of a certain god. Everything had meaning. Nowadays we wear jewelry because it has sentimental value or "because it goes with my sweater." Vikings and Baltic people groups wore their "statement pieces" for vastly different reasons.

What you wore spoke volumes before you said a word.

Or Speak softly and carry an iron staff

Viking witches (in Old Norse - volva singular, volur plural) were largely women. A small number of men took on the role but they were looked down on as effeminate.

Unlike a seer, a volva wandered from settlement to settlement, and they weren't always welcome. Sometimes Viking people met them with rocks and shouts to leave. This was because they didn't want trouble. A volva (who could also be a seer) was paid to cast spells and speak curses. A Viking could pay the volva to rain tribulation on an enemy's head. That's bad if your neighbor doesn't like you, and even worse when a settlement gets caught up in strife.

The volva often traveled with a staff, such as the iron staff (wand) pictured above. In this case, the wand was bent at the end, like some Viking swords, to remove its power after the volva died.

While this wand is iron, many have copper and bronze alloy tips. Why does that matter? Because when copper is put to fire, it turns the flame green.

There's nothing like messing with the elements to wow the locals.

Please let me know what surprised you from today's post. Any Viking/Baltic news you want to share?

Next week, I'll share pictures of the famous Lewis Chessmen and the recent amazing discovery.