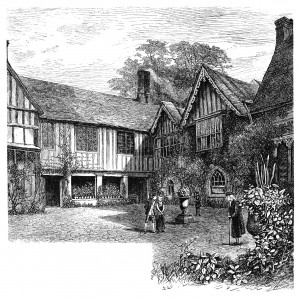 Q: When did keeping up appearances mean going back in time?

For the history buffs, today’s post is my second on English homes and cottages.

We like to feather our nests, reflecting our style and personality. The 18th century family was no different. Toss in the excess of mercantile wealth, and you have people with money to spend.

The second half of 18th century England saw a new trend of landlords. Cottage

building on their lands became attractive, even picturesque. One fad was to redesign homes and gardens to look like the much admired landscape art that featured long ago eras.

False lakes were dug. Hills were moved. Fake Roman and Norman era ruins were constructed. All done to affect the old.

The craze for out-dated things met its match in designer William Kent. Charged with designing part of Kensington Gardens, he planted dead trees to mimic a Salvatore Rosa picture.

If that doesn’t have you shaking your head, this will. Well-to-do country squire, Charles Hamilton of Painshill, hired a hermit to live in an old thatched cottage in the woods. The hermit’s duties? Keep his hermitage clean and sit at the door with a book in hand whenever the squire had visitors venturing near the woods.

Builder James Malton kept the fad going with his Essay on British Cottage Architecture (1798). He studied cottage architecture and the effects of time on those buildings. Malton rebuilt cottages for simple country folk and as retreats for the wealthy. But, he made the new look old.

Every era has its quirks and eccentricities. Fashion just rolls that way.

Now it’s your turn. What home design fashion trend (in history or modern times) gives you a laugh?