2nd Half of Top Ten Countdown: Why Vikings are Cool

And all of these reasons are non-violent. I bet you didn’t think you’d find that on this Viking list?

Yet, they mastered bending wooden planks to sleek “Drakkar” ship designs (Drakkar meaning dragon).  Key to Viking ship designs: the T-shaped keel developed before their neighbors the Frisians, Saxons or the Franks got hold of that technology.  Those neighbors stuck longer with a “flat-bottomed” ship, a shape better suited to shallow waters.  The Vikings had their flat-bottomed boats, but they also navigated the ocean with a deeper “water-slicing” keel.

The deeper hull also allowed for more stability and more cargo space down below.  Pretty smart!

Notice that small “spoon” looking instrument?  That’s an ear cleaner.  Yes, pretty much a Viking Q-tip that’s about the size of a Q-tip.  Pretty amazing to think of a metal worker creating a delicate tool that small.  In fact, Vikings revered their metal workers.  If a thrall (slave) had “metal worker” skills, he was highly revered in their society for such talent.  He could gain his freedom. When that happened, those thralls typically stayed put and made their home there.

With six distinct art styles that spanned from AD 750 to 1150. the Vikings kept busy during long winter months.  They enjoyed lots of indoor 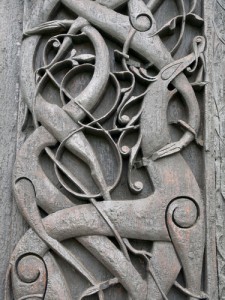 pastimes like Glima wrestling (similar to Greco-Roman wrestling) and games such as hnefatafl (similar to chess).  But, they were active artisans too, applying their styles to metal and wood with animals a popular theme.

Landnamabok, Iceland’s Book of Settlements, tells thirteen freewomen from the original four hundred settlers claimed their own land holding.  And, if you cause enough trouble, you might have a place named after you.  Such was the case of the thrall (slave) Melkorka, who after being taken to Iceland, stirred up plenty of trouble.  Her master decided to build a longhouse — to be hers alone — on the other side of the river.  That place? Melkorkustidir.

Where else in Europe did you have an annual meeting such as the Thing (also called Thingvellier and Althing)?  A meeting where laws and disputes are discussed and decided?  Each freeman had one vote.

Ask yourself: What else was happening in the world at that time? Any democracy? Self-governance for the common man?

So, while the Vikings did have a violent reputation, it’s worthwhile to take a look at their other contributions.

Thanks for stopping by and checking out Viking history.  Please tell me about your impression of Vikings and Viking culture…I’d love to hear from you.