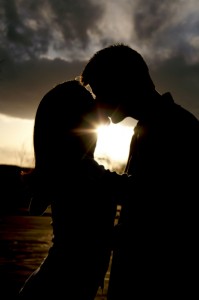 Sometimes sweet, sometimes torrid, but always memorable with your true love.  Maybe since we’re in February, kissing needs extra notice?  Whatever the case,  author Karen Michelle Nutt of KMNBooks Blogspot is celebrating first kisses this week and next.

I offered a Georgian first kiss and a Viking first kiss to KMN Books.

He tapped two fingers to the bench.  “I need you here every day without interruption.”

With him standing so close and irked, she wasn’t put off by his bristling irritation.  She found him quite appealing this way.  A smile flirted across her lips.

“I could say the same about you, my lord.”  She let her voice drop, a lure for him to flirt back with her.

“Ah, Lydia,” he said and shook his head, but there was no bite to him.

She leaned closer, liking the smell of his soap.  “Can’t blame a girl for trying?”

His knuckles grazed her cheek, her lips, and she captured his warm hand and kissed his knuckles.  She burned those copies in thin hope to slow him down, but that was a weak gamble on her part.  He knew how quickly she worked.

The other bolder effort was what truly scared her.  Her stomach fluttered unpleasantly when that deception came to mind; instead, she shoved it away, ignoring it.  Part of her wanted to explode and tell him and part of her was scared at what would happen.  She held his hand to her cheek and shut her eyes, not able to bear the honesty that always shone from his.

He brushed back strands of hair that fell about her face from the wind.  The way he touched her, she could be a fragile treasure that he adored and would keep forever.

“And so the red hooded hoyden of Wickersham tames the Greenwich beast,” he said dropping a kiss on her forehead, her hairline and skimming her temple.  “Or the phantom…not sure which name I like most today.”

“Jest if you must,” she said, letting her lips skim his cheek.  “But people hold misconceptions about you because you fail to show your face in public.  No one will ever know the truth.”

He pulled away but not with anger.  He stood too close for that and for the first time, something like consideration for that argument reflected in his eyes.  What was it about intimacy that tore down barriers erected to others in life?  The good people of Greenwich Park had laid out their arguments in the same vein to him these past three years since he was first scarred.  She knew as much since all and sundry told her as did Edward.  The he looked at her with a satisfied smile.

“You know the truth about me.” And he kissed her lips, a soft touch that feathered her. “That’s good enough for me.”  He pulled away again and his gold-tipped lashes hovered over topaz brown eyes.  “You really don’t see my scars when you look at me do you?”

That startled her. She reached up and stroked the cheek, knotted and shiny; her fingers skimmed lower to his shirt’s neckline where dark-edged scars showed.  Lydia’s hand slipped just inside the linen fabric to explore enticing flesh.

“I see a great deal but not scars,” she said, her voice throaty and low.

The scandalous idea of sketching him in the nude made her blush, but he didn’t notice.  She held that secret idea to herself…