Keep Your Eye On The Eight Ball

Maybe that’s why I write romance? Nothing beats the vicarious thrills you find on the page…all experienced from the comfort of your favorite reading spot. 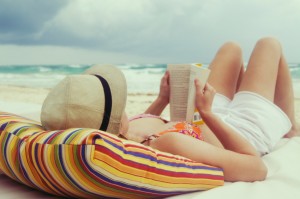 After a dating life that can best be described as a roller coaster, my own true love story began around the ripe old age of 26. I was ready for real adventure, and my 1% genetic material kicked things up a notch with a fabulous idea that had nothing to do with love:

Why not leave my comfortable biotech job in southern California and teach in parts unknown Africa?

My plans stayed a secret, except for telling my mom (who was not thrilled), but I forged ahead, finding an international school service. They sent an information packet with jobs in places like Mali, Mozambique, and Mauritania. So, I started making plans. 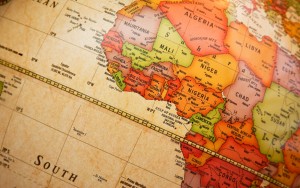 I was late…the last one to arrive at a mid-summer gathering of my co-workers. There was one seat left, and it was by him.

My female peers had been all aflutter over this guy named Brian. I thought he was too good-looking (what heroine ever thinks that?!). But, that’s real life for you. Besides, I had more important things on my mind like adventure, not a man.

Yet, something happened that night.

Conversation flowed. He started telling me about his field biology background and about his side-tracked plans to work in Africa of all places, studying rhinos. Whoa! The coincidence was too much. Before you could say adventure, I spilled my secret to this co-worker I hardly knew. As soon as the words were out, I asked him to keep it quiet.

He did. Pretty soon, one thing led to another. The summer happy hour turned into Chinese food dinners and running dates and pool, lots and lots of pool (billiards to some). This was fine. Brian was set on not ever marrying, and I was set on Africa. 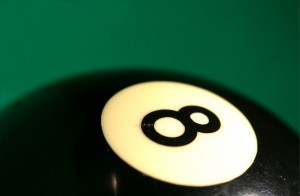 By Christmas, we both knew Africa wasn’t going to happen, and he wasn’t going to “not ever marry.” In fact, my 1% genetic material was about to kick in with its biggest shocker yet.

We were playing pool with some friends at a real dive. Some oh-so-romantic heavy metal hair band blasted from the juke box. Brian was about to call the 8 ball (a difficult double bank shot) when he leaned close and said, “If I make this shot, we’re going to Vegas. Tonight.”

He made the shot. We left for Vegas at midnight and drove all night. The next morning, we put our names in at the Candlelight Wedding Chapel for a 9:00 AM wedding, and went pronto to the courthouse. There, three ladies sat at typewriters, ready to take our information for the wedding license (yes, the era of typewriters…at least they were electric).

This is us years ago at another wedding.

We wore the same clothes from the night before, but an hour later, I married Brian, the man who won my heart. In a pool game. Sort of.

So, what’s your story? I’d love to hear how you fell in love.

And I’m glad to “meet you” here on the blog~

P.S. I write historical romance with Meet the Earl at Midnight coming soon.  If you’re curious for more take a look here www.ginaconkle,com