The Battle of Hastings: The Long Viking Reach

October 14th marks the anniversary of the Battle of Hastings. History lists battle after battle, so what’s the big deal? William the Conqueror changed the face of Europe on that fateful day, moving England…the world into a new era.

How did William get there?

1. Son of Robert I, Duke of Normandy and Herleva (aka Arlette), William didn’t let his illegitimate birth stop him from claiming his birthright. Robert I declared William heir to the Dukedom, a mantle William took after his father’s death in 1035.

3. October 1066, William showed up in Sussex with 7000 men. Edward showed up with 6000. Most agree the battle was fought all day at Senlac Hill, but some claim it was at Caldbec Hill. 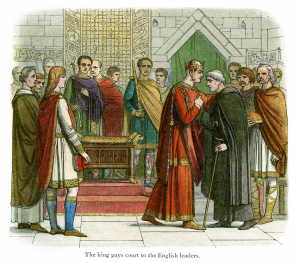 5. William was crowned King of England, Christmas Day, 1066. He was the first Norman king to take the throne, doing away with Anglo-Saxon rule.

What about the Long Viking reach?

Five More Facts for You:

1. William was of Viking origin (Normandy gets its name from the Nor’men, the Vikings). Rollo, his not-so-distant relative, pillaged northern France. Family lore of seizing what you want wasn’t so far removed from William.

2. The birthright mindset: Vikings weren’t troubled by issues of illegitimacy. Church-influenced Anglo-Saxons were. True, William was no longer “pure Viking.” He is the product of not-so-distant Vikings blending into Europe —the unique case of Norman culture at the time.

3. His attention to fortification. Vikings loved their ringforts. Anglo-Saxons loved their wooden fortifications called “Ramparts” — typically square, moderately elevated structures fenced in by wooden palisades. Some Anglo-Saxon burghs (villages) used existing stone walls left over from the Romans, but wood was their mainstay. Therein lies a problem. One flaming arrow and your defenses are toast. The Conqueror needed immediate protection for his soldiers. He commissioned Motte and Bailey castles built— wooden structures made on high, circular ground. King William soon after ordered 12 stone circular castles built. Are circles in Viking DNA?

4. During his reign, King William ordered a census taken, the Domesday Book. There we discover records of nearly 50 stone castles listed in his kingdom (probably incomplete since more exist today). William changed the look and feel of Anglo-Saxon England with Norman administrators, the Norman mode of cleanliness (a Viking trait), and shorter hair for men among many changes.

5. Reflecting on Viking history, you see trends of “conquer and blend.” King William followed his Viking ancestors by blending with the culture: many French words were added to the English language and the nobility was strengthened. However, not all change was good. Law of primogeniture (oldest male inherits) was set firmly in place as were changes in attitudes toward women. Oppression of women and a lack of equality runs counter to his Viking ancestry, yet King William’s rule marks a sharp decline in how women were treated.

Where did that influence come from? Stay tuned, history reader. I’ll dig deeper and we’ll hash over that slip of the Conqueror’s Viking DNA another time.

Cheers to you, Reader!
~Gina