10. Excellent Weapons.   Can you say ax in three different styles? 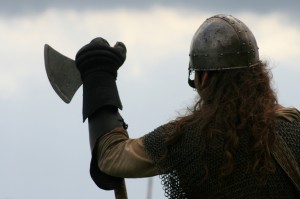 Sounds tough and scary, but the standard broad-bladed ax also doubled as a tool for everyday tasks.  Like the Egyptians building pyramids, the Vikings had basic tools and manpower.  That’s it.

The most common shipbuilding tool? The ax.

Can you imagine building a ship with a sword? Exactly my point.

9. Deadly Warriors.  So they had the shield berg (aka shield wall).  That’s not new. But unlike the Romans who populated their armies with conquered foreigners, Vikings fought side by side with friends and family.

Who would you rather have watching your back?  The guy who’s village you conquered last year? Or the people you grew up with and need for survival back home?

8.  B-E-R-S-E-R-K-E-R-S.  These guys belong in their own special warrior class. (click to tweet) They wore their bearskin “shirts,” and chewed mind-altering mushrooms which caused them to be impervious to pain. 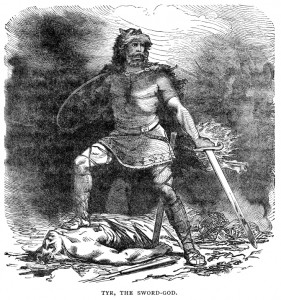 Berserkers, organized in units of 12, made first in “shock troops,” and were pivotal in large scale battles.

Details are sparse about the Battle of Hafrsfjord (c. 880 ) when Harald Finehair rowed his fleet at the enemy.   The turning point?  The fall of the enemy’s champion berserker, Haklang, made men turn tail and run.

The message: if you could fell that fierce berserker, you were unstoppable.

7. Adventurers.  The Kensington Runestone’s dated 1362.  That’s Viking writing…safe to say Vikings left it there.  L’Anse aux Meadows’ was founded circa AD 1000 by Leif Ericsson and friends. 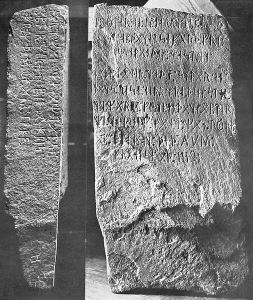 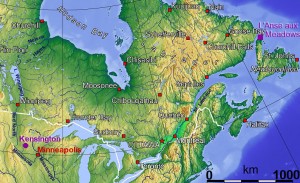 So can we change our history textbooks?  Isn’t it time we acknowledge the Vikings discovered North America first?

Not Columbus. Not the Chinese. The Vikings.

6.  Great skalds (storytellers).  Think of the past great civilizations.  Rome? Greece? Persia? What top three attributes spring to mind? Maybe these come up for you: 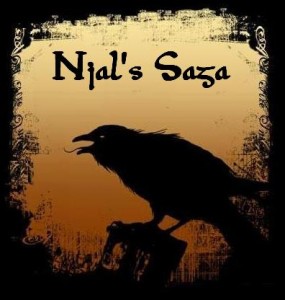 But what about great storytelling as a top three.  That’s one that comes up with Vikings.  Renowned for their violence, yes. But, also their vast array of stories. Njal’s Saga is the longest of the numerous family sagas.  If you liked Colleen McCullogh’s book The Thorn Birds, you might enjoy Njal’s Saga. Action-adventure…romance…good guys, bad guys.

You’d find Gunnar of Hlidarendi, famed, highly skilled warrior who disliked killing. Yes, you read that right.  You’ll also run across anti-hero Mord Valgardsson, a bad guy who ends up being not so bad.

Yes, there’s Viking violence and battles.  But, there’s a lot more…a lot more to the Vikings.

That’s why the countdown’s second half has nary a hint of violence.

Come back next week to find out just what are those 5 non-violent attributes.

Oh! And if you’re interested in more…connecting with Gina, hearing book news, snippets about historical times & places…why not sign up for my once a month newsletter?