Why Do We Love Viking? Part 3

What were Those 300 Women Doing? 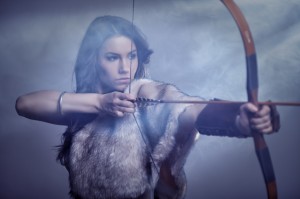 Travel past ancient times to the 8th century and you find 300 shield maidens who fought for Danish King Harold Wartooth against Swedish King Sigurd.

Medieval historian Saxo Grammitcus and the Norse Hervarar Saga record their rather unique names and feats of fury.

Some of the women who joined the fray? Einar the Fatbellied, Grette the Evil, and Blig Bignose.

Can’t you just picture these women?

Einar, Grette, and Blig were part of 300 women who showed up for battle, but not to be outdone, history tells of other brave Norsewomen.

Leif Ericson’s pregnant half-sister, Freydis, didn’t let pregnancy or being undressed stop her. While in Vinland, natives attacked the pregnant woman’s home.  She grabbed a sword, dashed out bare-breasted and partially clothed, going on counter-attack.

And the natives went running!

Freydis never gained the title shield maiden in the Greenland Saga. But, if you’re fearless enough to chase half-naked after attackers (while pregnant!), doesn’t that deserve honorary shield maiden status?  By the way, Freydis came away unscathed.

History Channel’s Vikings series has brought to life another famous shield maiden, Lagertha Lothbrok.  Saxo Grammaticus records some of her feats, in particular how Lagertha fought a battle for Ragnar Lothbrok, saving him from defeat by leading a flank attack.

The sagas refer to Lagertha’s “delicate frame” and her “matchless spirit.” That’s Saga-speak for “she was a hot babe with battle skills. Don’t mess with her.”

Vikings fans, remember…“You couldn’t kill me if you tried for a hundred years?”

In honor of our favorite Norsewoman, here’s a clip from History Channel on shieldmaidens where Lagertha talks about the famous 300.

Click this link and scroll down to the video: Shield Maidens Video Clip

But, before you leave, please tell us about a woman in history you admire and why. I’d love to hear from you!

Consider signing up for my newsletter. It’s brief. To the point. And packed with pictures, news, and historical tidbits.