An Excerpt of Norse Fire ~ by Gina Conkle 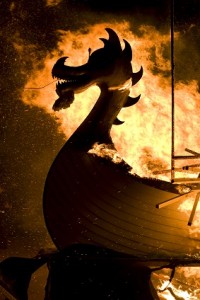 Share this on facebook, and enter to win the random drawing for a $25 B&N OR $25 Amazon e-gift card.

To qualify, you must leave your Facebook link in the comments below.  Drawing will be taken from the comments on October 1.
Share

Skalds claimed Odin fashioned the earth from the remains of defeated giants. He tossed their broken bones aside, the fragments forming islands. This morn the Norse god dressed Uppsala’s islands in thick white mist, vexing the hunt for a certain treasure hoard.

Fog kissed Sestra’s skin and messed with her curls. She re-braided her hair a third time because her hands needed a task.

She faced a churlish Brand in a small boat cluttered with nets and baskets. They were out to fish should anyone ask.

The warrior had shocked her, showing up at sunrise with Lord Hakan at the river’s edge. The Viking swore an oath to protect her on this quest and bring back the stolen treasure — for none doubted Gorm had stolen it. They were to deliver the hoard to Lord Hakan’s farm where someone waited for them there.

But Brand was a man of few words. He offered no reason for his change of heart.

“You missed the ship to Gotland,” she said.

He squinted at her as though she’d gone soft in the head. “I know.”

Their little vessel sliced through water, propelled by muscle and sinew rippling under his black tunic.

“But, I thought you wanted to leave…seek your new life on Gotland.

He shrugged, focusing beyond her. “I’ll take another boat.”

“But you said this wasn’t your fight.”

His silvery gaze met hers. “And now I’m looking for treasure with you.”

She shivered, tugging the ends of her cloak. Brand pulled long and hard on the oars, a steady rocking motion that played on her senses. He searched the distance, his hawkish eyes reading the mist the way others read the runes. Most of the time he avoided eye contact…quite a feat considering they sat so close.

Her veins thrummed. With lust or fear, she wasn’t sure. Both emotions left her weak all over, inner turmoil she didn’t want. She concentrated on tying the end of her long braid, if only to keep from staring at Brand.

“You’re not here for the gold.” She looped a linen strip around her hair. “I saw your face when Lord Hakan offered to reward us. You were just as surprised as me when he bade us keep one palm for ourselves.”

One palm, a handful, was the Viking measurement used in trade. She cupped her hand in her lap, imagining the coins she would hold.

Strong hands gripped the oars, big hands that would grasp much wealth. “Never send a boy to do a man’s job. That’s why. But the reward is welcome.”

His voice was hoarse from having been up all night. He’d waded through chill waters, loading the three vessels waiting in the river. During the night, many came to the river’s edge pleading for a place on the ships. News spread quickly. Gorm was  burning Uppsala, and he began with the ships.

Soon no one would be able to leave.

Come sunrise, Brand offered his spot to an old man.

The young black-haired warrior was the first to say he’d help find the hoard after they emerged from Mardred and Halsten’s longhouse last night.

“He’s a whelp,” he scoffed. “Get this right, lives are saved. Get this wrong, people die.”

The whelp looked plenty old enough to her, but Brand cut the situation down to size. And now there’d be a reward for their efforts.

Would her new lord allow her to purchase her freedom?

If they returned safely with the treasure, that is.

The hair on her neck prickled from the mysterious mist. ‘Twould be better if the air cleared, but Brand navigated the vessel unbothered by the poor visibility. He kept an eye to the treetops poking through the fog since she’d already told him which island they sought.

Her fingers rolled a stray thread. “Have you decided what you’ll do with your gold?”

Gulls squawked nearby, and the frustrating man sculled in silence, the oars slipping in and out of water with the barest sound.

“Always talk this much?”

“When I’m nervous, yes. I wish you’d talk more. I need to hear your voice. It’s so strange out here.”

Her head lolled sideways, the evening taking its toll on her. Brand’s curt stare met hers then dipped lower to her busy fingers worrying the thread. His features softened.

Of course he would. He’d vowed as much, and his words, few though they were, worked a kind of silken magic.

“My thanks for that. But, you haven’t said what you’ll do with your palm of gold.”

“You’re full of questions this morning.”

“And you’re short on answers.” She fidgeted enough to rock the boat. “‘Tis a simple thing to talk with me.”

His mouth made a grim line in black whiskers.

“What do you want to talk about?”

“You could start by telling me if you get something else. You’re a freeman, a warrior long in service to Lord Hakan. ‘Twould be natural to get a bigger reward than a thrall.”

One corner of his mouth curved up.

Why not start with Book 1, Norse Jewel?

Amazon US   Amazon CAN

Share this on facebook, and enter to win the random drawing for a $25 B&N OR $25 Amazon e-gift card.

To qualify, you must leave your Facebook link in the comments below.  Drawing will be taken from the comments on October 1.