Tuesday Teaser: A Chance to Escape 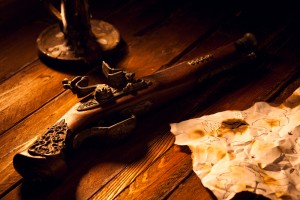 No sooner had she bared herself to Lord Bowles, gave him the chance to escape their arrangement, when the cottage door opened.

“Riders coming. Two of them,” Mr. Beckworth bellowed from below.

“I’m on my way,” he yelled and grabbed her shoulders.

She jolted at his hot, hazel-eyed scrutiny. Stern and unshaven, the master of Pallinsburn was positively hawkish.

“Then it’s settled. You’re staying with me.” Lord Bowles headed out of his chamber and she followed, colliding into him when he stopped short. Her leg bumped his pistol butt sticking out from his boot.

“Keep to the cottage.”

His tone brooked no argument, but of course she would anyway.

“Don’t you think it’d be helpful if I were with you? Perhaps I could—”

“No,” he barked, descending the stairs. “Unpack your things. You’re not going anywhere.”

Skirts clutched high, she scurried after him. “But, Reinhard might—”

“At least do me the courtesy of addressing him less intimately.” He whipped on his redingote. “Remember. I am your husband.”

For a little while…