What if Cinderella doesn’t want her shoe back? 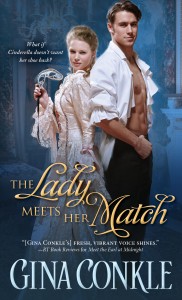 Did you grow up with fairy tales?

A favorite of mine was Cinderella. I loved reading about a kind-hearted heroine with a magical rags-to-ballgown evening. Plus, being able to talk with animal friends was pretty neat.

Yet, as I got older, I had a few problems with the story. Like why did the funky Grand Duke hunt down Cinderella? Shouldn’t the prince search for his true love?

The prince’s lack of ardor bugged me. He should’ve been the one hot on Cinderella’s trail.

You know what else? The prince held zero appeal — we’re talking flat as a pancake personality. His role was pretty much “dance and decide” the woman you’ll marry.

The day after the ball, he insisted Cinderella was his true love. He wouldn’t marry anyone else but the girl who could wear the glass slipper. At least he was firm on that.

So, he made his grand announcement and retreated to his room. To wait.  I think I was nine years old when His Royal Highness’s appeal took a nosedive.

Years later, when The Lady Meets Her Match formed, the Cinderella tale fit. I pictured Claire, the housekeeper from Meet the Earl at Midnight sneaking into an elegant ball in the same pale blue and silvery gown Cinderella wore. This time things were different.

And Claire’s fairy godmother is a saucy French woman with some eye-opening advice. Don’t typecast her as old and plump!

Life’s full of surprises. So is this modern retelling of Cinderella.

Why not take a look at chapter one on Amazon and see for yourself?