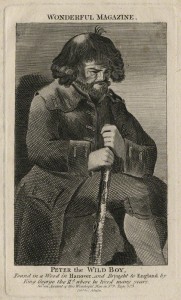 Welcome to ‘History Thursday’ where you get quick historical flashbacks

Do you love Rudyard Kipling’s ‘Jungle Book’? Disney’s much loved movie is based on Kipling’s tales of Mowgli, a wild boy of India. There’s also Edgar Rice Burrough’s ‘Tarzan’ of the African continent, another wild man story.

But was there ever a REAL wild boy? Yes!

In 1725, a young, feral boy was found in the northern woods near Hamelin, Germany. The hunting party was led by none other than King George I, but the mystery of the boy deepened.

No one could name the lad’s parents.

And people had no idea how long he’d lived in the wild.

The then unnamed boy walked on all fours and ate wild plants. He couldn’t speak. His behavior lacked all socialization, but men of science guessed him to be 12 years old when found.

What would happen to this puzzling, wild boy?

Being found by King George I sealed his fate. Peter the Wild Boy went to England. He caused quite a stir, but the public ruckus died down a year later. By then, Caroline, Princess of Wales took him under her wing. She sought various experts to help the young man. All of them failed.

Unlike Tarzan and Mowgli, Peter never learned to speak, read, or write. Hirsute and strong as an adult, he

comprehended what was said to him, but only managed to say “Peter” and “King George” and hum a few tunes. Nor was love in the cards for Peter.

Entrusted to the care of Mrs. Titchburn, the Queen’s bedchamber woman, Peter lived out his days in rural quiet. Famous philosophers paid him visits as did other men of science until his death in February, 1785. Peter was buried in Northchurch.